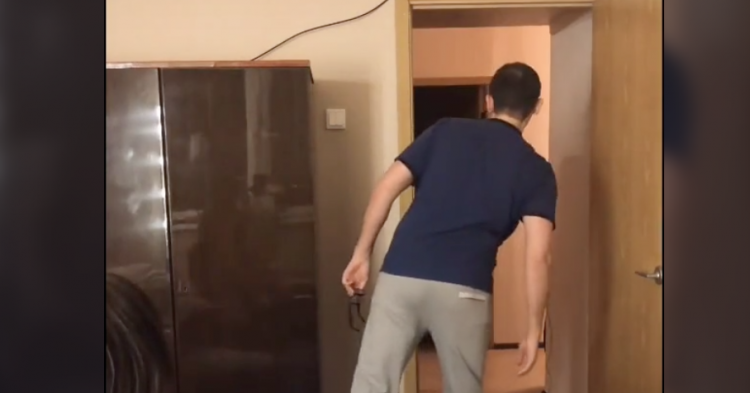 Although this TikTok video is only fifteen seconds long, it has terrified the internet like no other clip out there today. Although the clip was uploaded a few months ago to the Chinese-created social media app, journalist Ben Bell tweeted the clip to his official Twitter account and helped propel the terrifying content into viral territory. WARNING: If you scare easily or do not like it when terrifying things jump out from around corners in horror movies, this video might not be for you, but if you like a good scare, continue to read the rest of this post until you get to the viral video embedded at the bottom.

In the video, which Ben Bell captioned, “2020 in one TikTok,” you’ll see a pair of people – one man and one woman. The video begins when the man who is wearing a blue t-shirt walks through a doorway toward the fridge. When the light switches off, we see a shadowed figure through the doorway the man just stepped through. The woman who is wearing a pink blouse gasps and points to the figure through the door. This is when things get very scary.

The man turns around and flips back on the light switch. As he peers through the lighted doorway, he sees that there is no figure there. It has entirely disappeared! The man does not know what is scaring the woman, so he shoots her a frown. He flips off the light switch again and turns back toward the fridge. But the figure has returned, and the woman points at it all over again.

Again, the man turns off the light switch. As expected, the figure disappears, and the man sees nothing in the hallway. But when he turns the light off again, something terrifying happens. The figure dashes toward the camera and leaps off the screen to give you a good jump! If you’re not one for these types of scares, turn away from the screen in the last few seconds. However, the noise the creature makes will probably still make you jump up from your chair.

Because Ben shared the scary video, it went viral in an unexpected way. Before long, the clip was viewed millions of times on the social media platform. And it also attracted a lot of comments from viewers.

“Whatever you do. Do NOT click on this,” one Twitter user wrote. “Wish I could go back in time and be free of this curse.”

“I’m really mad at whoever made this,” a fan commented. “Scared me to death.”

“I nearly hurt myself. Why would someone make this,” another said.

To make sure this clip did not get missed, a TikTok user went so far as to name it the “scariest video on the internet.”

“I was on the earth, and currently, I’m in heaven,” the person added. “My soul left my body.”

This video was supposed to scare you. If you didn’t jump when the ghoul dashed toward the camera, I take my hat off to you.

What do you think about this scary 2020 video?