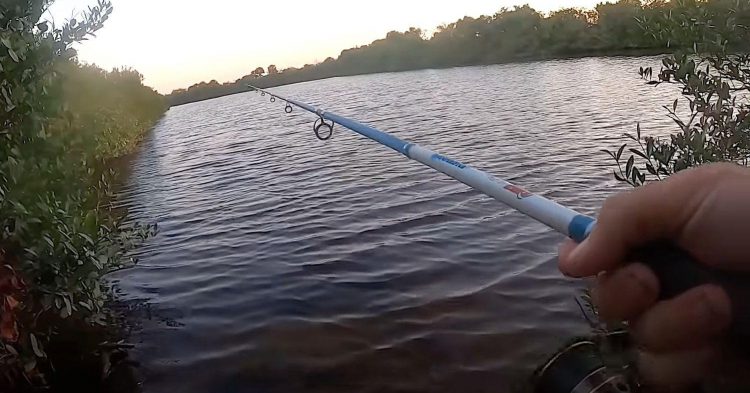 A fisherman in Florida caught a big surprise when a massive monster came out of the water attached to the other end of his fishing line. Instead of catching white tarpon as he expected, the man behind the camera lured one of Florida’s most dangerous beasts. Within moments of hooking the critter, a big alligator burst through the surface of the water and begins chasing the man and tries to attack him.

The alligator first appears around the 20-second mark in the video, which was uploaded to YouTube before it went viral. At first, the alligator looks like a log floating in the water, but when it begins to move, the fisherman realizes that he is in serious danger. He starts to flee the lakeside, running back toward the mainland. However, the alligator has other plans.

At the 50-second mark in the video, you’ll see that the alligator chased the man back ashore and is eyeing him for lunch. For the rest of the video, the man toys with the gator, which sets his heart racing as it tries to chase him down. But around the 1:30-second mark, the alligator decides no longer to pursue the man and turns around to go back toward the water.

However, the man continues to antagonize the creature. He shouts at it and calls at it, trying to get it to look back in his direction. Throughout the video, the fisherman breaths heavily as he tries to settle down from the fright the predator gave him.

You will hear a splash in the video when the gator returns to the lake. And when the man knows that the gator is gone, he admits that he is getting out of there since he no longer wants to risk his life around Florida’s dangerous creatures.

Hundreds of people shared comments about the viral video on YouTube. The following is a selection of comments from viewers around the globe.

“And then the second gator appears at your side. ‘Clever girl.’”

“Why the hell would you even go the direction of that gator after he came ashore? I’m glad you are ok. I hope you are never in a horror movie.”

“This guy is crazy. I would have been terrified, and he’s going back and looking at it and saying ‘hey buddy.’”

Several people commented about how the fisherman fell to the ground as the alligator was chasing him away from the water. If it had been a horror movie, the gator would have got him.

“And I thought people only tripped and fell down at the worst possible time in horror movies for suspense.”

“He fell down. He actually fell down while running away. That was the worst thing he could’ve done. I thought that only happened in the movies.”

A Florida native commented about the foolishness of this fisherman.

“Lived in Florida my whole life. This is pretty much how you get killed by a gator. Need to treat these animals with respect and act with caution in their environment.”

What do you think about this footage?