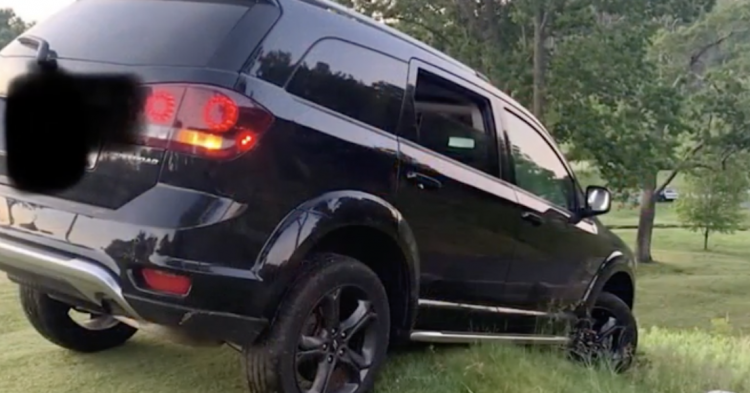 Brae Burn Country Club members were greeted with a shocking sight on the sixth hole this past Wednesday. As the sun rose over the golf course, it revealed a new hazard that was put in place overnight. Apparently, someone had driven a black SUV onto the country club golf course and gotten it stuck on the edge of the rise on the course, and now the driver is blaming the navigation app for guiding them onto the course and toward where they eventually got stuck.

“It was pitch-black out when he was driving and took one of the turns too wide and got stuck,” police wrote.

The incident occurred in the wealthy suburb of Newton, Massachusetts, outside of Boston. According to the police report from the incident, employees of the country club alerted the police to the abandoned SUV and led the cops to the sixth hole, where they showed the officers the black car teetering along the ridge.

Police eventually caught up with the driver of the SUV and blasted them with tons of questions. However, the driver kept coming back to one excuse – the navigation app made them do it. According to the person who was behind the wheel of the SUV late at night, they were following the navigation app, Waze, when they were told to take a turn that led them directly onto the golf course.

The driver had just dropped off friends and was following the directions on the app when he was told to turn onto the Brae Burn County Club course. The driver got past a gate and a no-trespassing sign before driving onto the golf course and getting the SUV stuck on the ridge.

A tow truck was able to pull the SUV off the golf course and get it back on the road.

Police said that the driver of the black SUV would not face any charges. The golf course did not press charges on the driver despite him driving onto their course in the middle of the night.

The country club staff confirmed that the SUV did not damage the landscape on the golf course.

“When the officers go there,” said Lt. Bruce Apotheker of the Newton Police Department, “one of the concerns is always is somebody drinking or something like that. They found no indication of any kind of impairment. I’ve been with the police department for thirty-seven years, and I’ve never a car quite like this. Sometimes a vehicle may end up somewhere on purpose, but to have somebody’s GPS take them to a golf course and to end up on hole number six, that’s quite unusual.”

What do you think about this incident on the golf course outside of Boston? Do you think the driver was impaired or just following the GPS?