Hero Boy Saves His Sister From A Vicious Dog Attack 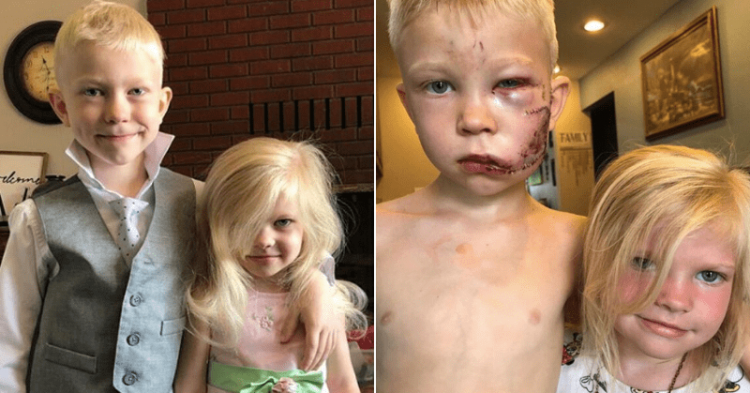 When a little boy realized that his little sister was about to get mauled by a vicious dog, he did the only thing that made sense to him. The boy, 6, stepped in front of the charging canine and began fighting it back while he urged his little sister to run for safety. The young boy, Bridger from Cheyenne, Wyoming, is now being hailed a hero for risking his life to protect his sister from death by a dog.

The siblings’ aunt Nikki Walter watched the whole scene unfold. From a safe distance, Walker watched young Bridger step in front of the charging dog when it got too close to his beloved sister. While his sister got out of the incident unscathed, Bridger got seriously mauled. The dog attacked his head and face and left him disfigured. 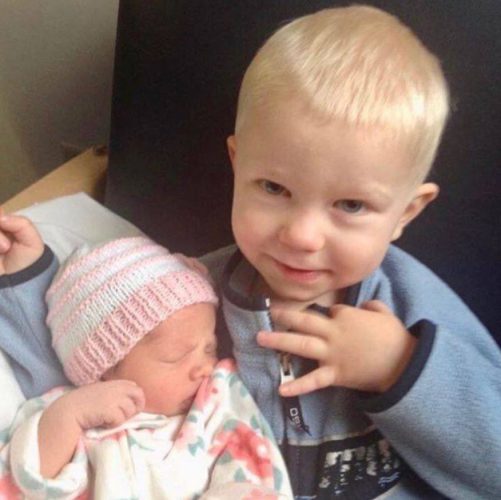 Bridger simply saw no other way to handle the situation: “If someone had to die, I thought it should be me.

Images of the victim have gone viral on social media. Walker shared snaps on Instagram and wrote that the little boy, who was just six-years-old at the time of the attack, needed “90 stitches (give or take) from a skilled plastic surgeon.” Walker was able to gain publicity for her nephew by tagging Hollywood superhero actors, including Tom Holland, Chris Hemsworth, Robert Downey, Jr., Chadwick Boseman, Mark Ruffalo, Vin Diesel, Chris Hiddleston, and Chris Evans.

The distraught aunt wrote, “Hey, all. Please, share my nephew’s story so that it gets as much exposure as it can. We know that our little hero would love some words of encouragement from his favorite heroes. On July 9th, my six-year-old nephew Bridger saved his little sister’s life by standing between her and a charging dog. After getting bit several times on the face and head, he grabbed his sister’s hand and ran with her to keep her safe. He later said, “If someone had to die, I thought it should be me.” After receiving 90 stitches (give or take) from a skilled plastic surgeon, he’s finally resting at home. We love our brave boy and want all the other superheroes to know about this latest hero who joined their ranks.” 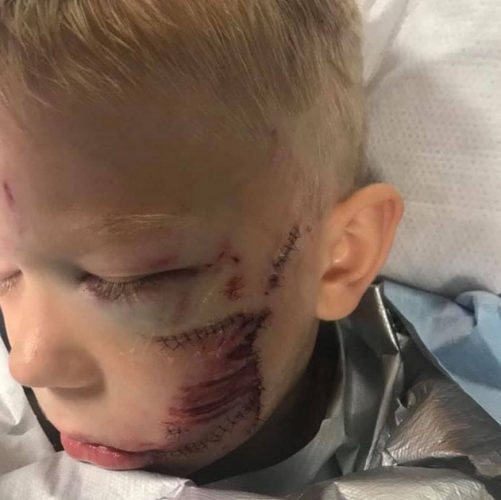 The violent dog “was a German Shepherd mix,” wrote Walker in the comment section of her now-viral post. She said that the dog’s owners decided to euthanize the aggressive dog, which upset the dog-attack victim.

Walker said, “Bridger actually cried when he found out that the dog would be put down. He hated the idea of any dog—even that one—dying.”

She added, “He can’t smile too widely yet, but he was grinning as I read some of your comments to him. I’d also like to mention here that the dog’s owners are really great people who have been nothing but kind to Bridger and his family. We feel no resentment toward them at all, and—if anything—there’s only been an increase of love between our families as a result of this incident.”

What do you think about this attack?