Influencer Confronts Men Who Were Mocking Her During A Photoshoot 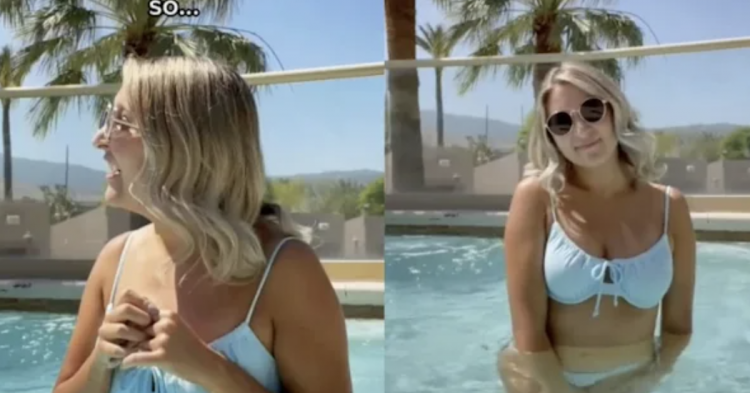 One TikTok user surprised her fans when she confronted two men who mocked her during a photoshoot. Posting under her TikTok account @SamanthaLongton, Samantha often shares images and videos featuring her life. However, she was “trying to get a cute pic at the pool” but was harassed when she heard “two men audibly making fun of me.” While Samantha could have tried to ignore the men, instead, she decided to stand up to them and teach them a lesson in respect.

The incident was recorded on camera. Samantha was located in the pool for a solo photoshoot when she overheard the rude men ridiculing her for trying to showcase her bikini-clad body for her TikTok fans.

“Did you guys want one together?” Samantha asks in the video, smiling.

“A picture!” Samantha in a saccharine sweet voice reminiscent of a good customer service employee. “I can take one for you. Do you have your phone?”

When the men declined the opportunity to take a photo, the TikTok user seemed to have bested them in the encounter. Although it began with them laughing at her for taking photos in the pool, Samantha asserted herself and was able to show the men that she was not afraid of them or intimidated by them despite their derision and ridicule.

After posting the video to TikTok, Samantha was inundated with support from other TikTok users. Thousands of people shared comments on the video in support of her for standing up against the rude men at the pool.

“I can feel the adrenaline pumping through your veins,” one person commented.

“It’s not even me, and my heart is pounding for her!!” another added.

“We love a confident, confrontational QUEEN!” another person cheered for Samantha.

“This is so brave. I’m shaking,” another supporter contributed.

“I can feel your heartbeat, but so glad you did this.”

“They always get much less brave once confronted.”

“I do this condescending, passive-aggressive voice, too. It kills people,” one TikTok user wrote in the comments.

“We love a confident, confrontational Queen!”

“It’s not even me, and my heart is pounding for her!”

“All the women on this app calling out men for their audacity is my favorite thing,” one female user wrote in support of Samantha confronting the men at the pool.

One user wondered if the men meant any harm.

“I don’t know what they did, but sometimes people aren’t always making fun of you. But I get why you would think that!”

Several people suggested that they would have liked to watch Samantha be more direct with her harassers.

“This is so passive-aggressive it got you to know where you didn’t directly confront anything. But, ok, go, girl power!”

“Why are y’all acting like this is some kind of epic takedown?” one user wrote.

Do you think this TikTok user taught her harassers a lesson? Or should she have been more direct in her talk?

Im not a confrontational gal but sometimes men just .... #fyp