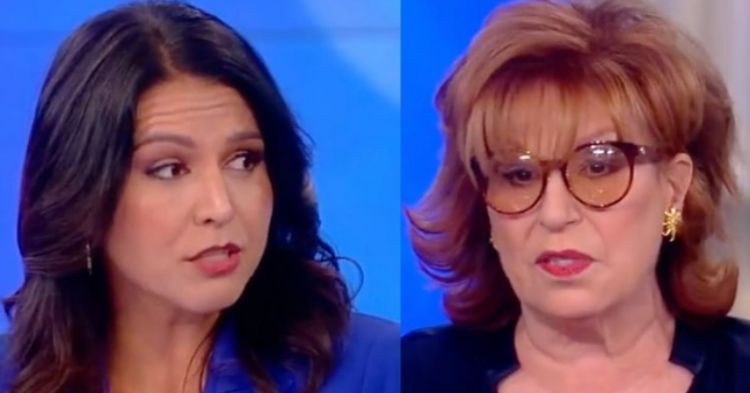 Joy Behar is not known for biting her tongue. Her feistiness is one of the reasons she’d held down such a long career on The View. But after her fiasco with Donald Trump Jr. last week and now her confrontation with 2020 presidential candidate Tulsi Gabbard, Joy Behar might be on the downward slope of her career, all things depending – but this recent squabble is something else.

Tulsi Gabbard is a National Guardswoman and a 2020 candidate for the Democratic nomination for president. She appeared on The View this week to speak to the hosts of the show about her campaign as well as the state of the country.

Gabbard is a congresswoman from Hawaii. But she was all hands on deck when she appeared on The View Wednesday morning. Because Joy Behar had previously called Gabbard a “useful idiots” who is in the pocket of the Russians, she lashed back at Behar with venom and anger.

Behar was left speechless following the come-back from the young congresswoman.

Within moments of coming on the show, Gabbard took control of the setting and immediately confronted Behar about the libelous comments. That’s why people watching at home were stunned about what happened next.

“Some of you have accused me of being a traitor to my country, a Russian asset, a trojan horse, or a useful idiot I think was the term that you used,” Gabbard told Behar.

Behar said, “Well, useful.” It took her a few moments, but she then added, “But that’s a Russian term, they use that.”

Gabbard, who describes herself as a “patriot” given her service to the United States Military, “loves this country” and would never try to sell secrets for Russia or work for Vladimir Putin.

But that did not put Behar off her scent. She then mentioned how certain conservative leaders have affection for Gabbard and her politics.

Behar said, “Franklin Graham finds you refreshing. He doesn’t find me refreshing. Richard Spencer, the white nationalist leader, says he could vote for you.”

The Congresswoman laughed and said: “This is why I’m here — because you and other people continue to spread these innuendos that have nothing to do with who I am.”

Gabbard then used the opportunity to talk about her personal history.

“I’m a soldier — because of the attacks on 9/11,” Gabbard said. “I enlisted in the military to go after and defeat and destroy the evil that visited us on that day. I’ve served now for over 16 years. I deployed twice to the Middle East during the height of the war, where every single day, I saw firsthand the terribly high human cost. It’s why I ran for Congress.”

One fan wrote a tweet to ABC saying: “You all are the media outlets we are supposed to trust as accurate and unbiased? What a joke. Who really poses the biggest threat to our democracy by spreading disinformation to mislead voters and influence our elections? Russian bots? Yeah, okay.”

By the end of her time on the show, Gabbard had silenced Behar.