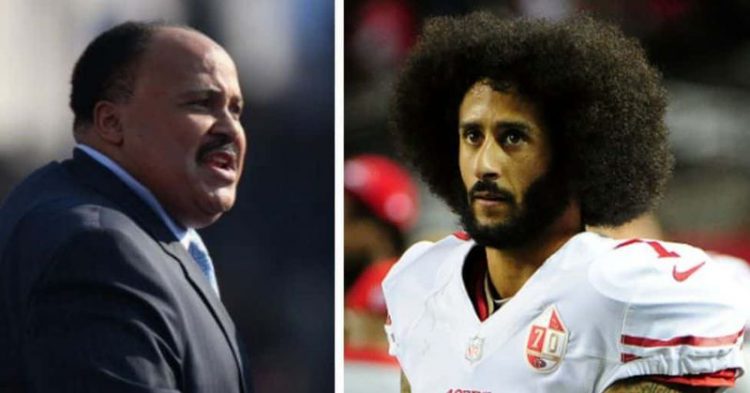 The son of an American hero and civil rights legend, Martin Luther King Jr., has stepped up to use his massive influence to call for a boycott of the NFL. Martin Luther King III claims that Colin Kaepernick has been blacklisted by the NFL and therefore, people who care about equality should boycott the league until an NFL team hires the quarterback.

While NFL teams deny that they’ve blacklisted Kaepernick, the player has not been taken on by a team in years. This is coincidental given that he was doing well. Only after he started taking a knee during the playing of the national anthem at the NFL games. While Kaepernick was using his right to protest police brutality and racism, the NFL ratings dropped as more and more athletes took a knee during the anthem.

Martin Luther King III told TMZ that change is needed. The NFL needs to get a reality check, and he said that “What would change it overnight is if the public decided, ‘Okay, we’re not going to watch.'”

And he’s right. The NFL is already struggling to survive. Millions of Americans have quit watching the sport in favor of other programs. The NFL experienced a ratings drop of seventeen percent in 2016 and 2017. This year it is possible that even fewer Americans will drop the NFL from their lives. And with a legend like Martin Luther King III calling for people to stop watching the league, people will do it.

“The industry did blackball him, which is not good,” MLK III says … “He certainly is one of the most talented quarterbacks even today, probably.”

While many teams are in need of a quarterback, they don’t seem to be looking to hire Kaepernick to fill the roles. Instead, they’re willing to lose big in terms of score instead of face the repercussions of hiring Kaepernick, who is a controversial figure in the sport.

“There are times when you need strategic quarterbacks who have a proven record,” King III says. “And, certainly, Colin Kaepernick is one of those.”

Even former United States Presidential candidate Marco Rubio believes the NFL is blacklisting Kaepernick. During an interview with TMZ, Rubio was happy to lay it all out there for the public:

“Certainly there aren’t 64 better QBs playing in the NFL right now. There’s a lot that goes into those decisions about whether to hire a guy or not.”

He added, “I’m not an NFL owner, but I can tell you I don’t think there are 64 better quarterbacks … that’s obviously not football that’s keeping him away.”

According to the former Presidential candidate for the Republican party, NFL owners “think he brings many other things with him that they don’t want around.” But he added, “If I were an owner, and he was the best guy, I’d bring him in despite the other stuff. But, there’s a lot that goes into that.”

What do you think about Martin Luther King III’s call for people to boycott the NFL until a team hires Kaepernick?