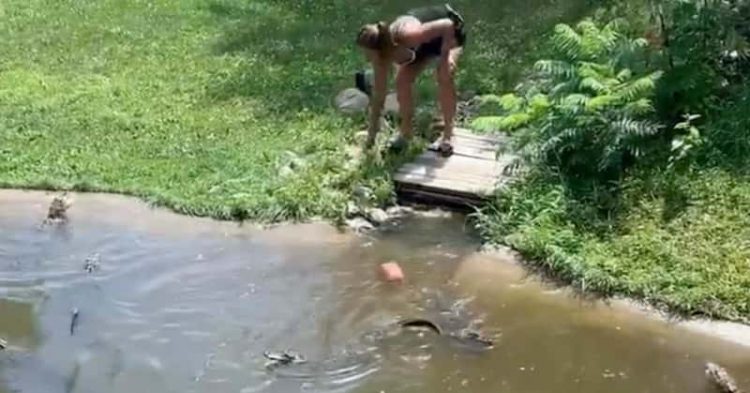 Some people simply do not realize how close to death they are. That’s what one mother seemed to exhibit after she dropped her wallet into alligator-infested waters and decided to risk her life – and her son’s life – by fishing into the alligator pit with her bare hands. Although these reptiles were more than eager to separate her hand from the rest of her body, the mother felt it absolutely necessary to risk losing her appendage so she could be reunited with her wallet again.

The incident occurred after Ashlynn Curtis went to Safari North on July 19, 2020. She was shocked when she watched a mother jump the fence protecting people from the animals in the alligator pit. Not only did this woman jump over the fence and approach the alligators, but she also brought her young son with her. This put both of their lives in jeopardy as mom stopped watching her son so she could reach into the water, avoiding the alligators as best she could to get her wallet back.

Safari North describes itself as “a family-friendly environment where you can feed a giraffe or ride a camel and see animals from around the world!” The woman who has not been named took this description to the next level by jumping the fence to the alligator pit along with her son, putting their lives in danger.

Ashlynn captured the mom and her son risking their lives so the mother could retrieve her wallet from the alligator pit.

“Went to the zoo today,” she writes. “A woman dropped her wallet into the alligator enclosure. So she went INSIDE the enclosure to get it as well as her child. Meanwhile, she’s screaming at him that it’s his fault.”

Ashlynn captured three separate videos because she was so shocked to find the woman inside the enclosure.

The first video starts with a little boy shouting, “I can’t get out. I don’t know how.”

To the left of where the boy is shouting for his life, the swimming hole is teeming with alligators. There is also his mother there poking her hand into the water to find her wallet, which she apparently dropped into the pit by accident.

While the woman pokes at her wallet and her son runs around the alligators, the woman talks on her phone. Another child can be heard in the video calling out, “don’t do that; you could get bitten by an alligator.” You know that something is wrong when a child tells an adult what is right and wrong.

Alligators have enough strength to bite through steel. This woman made a terrible mistake putting her life in danger so she could recover her lost wallet. A wallet should not be worth the safety of a child.

“Very stupid. That child could have been killed. Really?”

“Why would she let her child go down there with her.”

“That lady is more dangerous than an alligator.”

What do you think about this footage? Should the woman be charged with child endangerment for putting him near the alligators?