One Man’s “Dangerous” Cooking Hack Has Caused Quite The Controversy 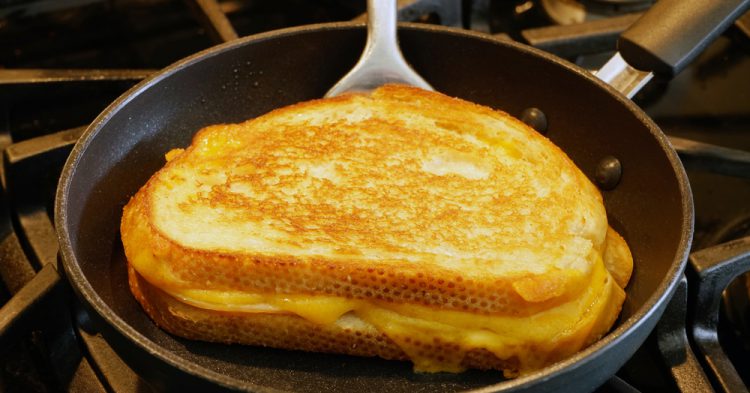 One TikTok user named Donna Bonnana posted a cooking hack that her husband uses when making grilled cheese sandwiches. As well as loading up the video with hashtags like “Husband Cooking” and “Over 40,” Donna put a caption on the video to warn viewers that her husband’s trick might be a bit controversial for some viewers on the Chinese-created TikTok social media platform – and she was one hundred percent right about that!

In the video, the husband picks up the frying pan with one hand while sliding the spatula under the sandwich with the other hand. Then he simply turns around the frying pan and connects it to the backside of the sandwich. When he places the frying pan back onto the hot stovetop, the sandwich has been flipped, and the cooking can proceed without any problems.

The grilled cheese trick ensures that the sandwich does not fall apart when it gets flipped. And because it works so well, the video amassed millions of views in a very short period of time. And as of this writing, it has more than 3.7 million views and more than 410,000 likes on the Chinese social media platform that is favored by Americans.

Viewers were delighted by the simple trick and swore that they would be using it next time they’re frying some bread on the stove.

“I never once considered that flipping the pan was an option. I see the world differently now, “Damian wrote.

Some people wanted more content from Donna and her husband. One person requested a video to see how the over-forty-year-old man puts toothpaste on his toothbrush.

The commenter wrote, “Next episode: putting toothpaste on your toothbrush” – the comment received more than 3,700 likes.

“Next episode: How to peel a banana.”

“Up next is a tutorial on flipping the light switch from off to on. Stay tuned. This one’s going to blow your mind!”

“Have you ever thought about flipping the whole stove?”

“Some of y’all are hating, but that’s (very) smart if you put like tomatoes or bacon in your grilled cheese, it falls out a lot when you flip.”

“When did flipping a grilled cheese ever present a problem that needed fixing?”

Some people felt it was too dangerous.

“Or you can use the spatula for its intended purpose!”

“Don’t do this with oil in the pan!” warned one person.

Another added, “OK, so this is good, but people, PLEASE be careful if you have any oil left in the pan. If you flip it over a flame, it could not end well!”

“Bro, just flip the bread! Why you all got to make it so complicated?”

What do you think about this grilled cheese cooking hack?