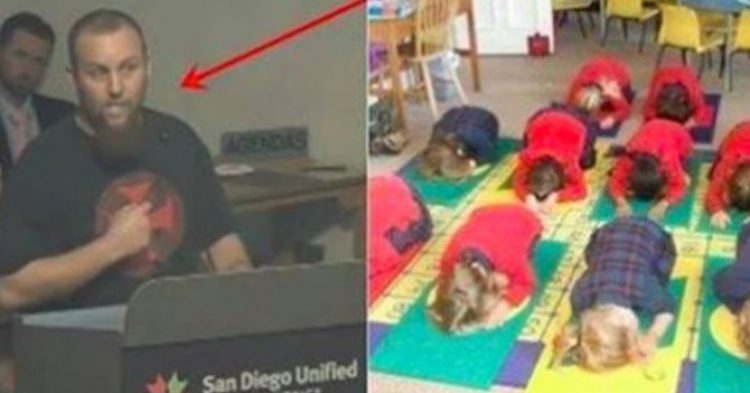 A San Diego school sparked outrage when it worked with the Council on American Islamic Relations to propose a program that protected Muslim students, alarming one father in particular, who had some choice words for the school board. Christopher Wyrick attended his children’s school board meeting after conservative websites began reporting on the district’s new program to protect Muslim students from bullying that was constructed with the help of CAIR.

Trustee Kevin Beiser spoke at the board meeting, clarifying the program amid confusion from parents.

“We will not allow Muslim students in San Diego schools to be spit on,” Beiser said, San Diego Tribune reported.

“All students should be safe,” one parent agreed.

A short while later, parent Wyrick approached the school board and confronted it on its work with CAIR. In a clip of the confrontation, Wyrick appears angered by the program and bluntly states his concerns.

“At what point did you decide that it was OK to teach my children about Islam?” he says. Later, Wyrick refuses to leave the podium and remains adamant he would finish his speech.

“You’re gonna have to drag me out of here,” he yells.

The story quickly went viral, with many applauding Wyrick and slamming the school for using its anti-bullying program do what they perceived as promoting Islam. Many commenters equated the anti-Islamophobia campaign as implementing sharia law in the school district.

“Keep after them Mr. Wyrick,” one reader commented on the site’s Facebook page. “The organization CAIR is a front for the Muslim brotherhood and every member of CAIR is a member of The Muslim Brotherhood and all of them are members of HAMAS.CAIR is pushing these Islam teachings nationwide and infiltrating the school. These teaching are actually FORCED Conversion to Islam and it is ILLEGAL. Everybody on the San Diego School Board should be fired ASAP.”

“Good for you sir. I stand behind you 100%,” another added. “This crap doesn’t belong in America’s school systems. Can you even begin to imagine if we went to their Country and did not assimilate to their beliefs? This is America and we already have our beliefs and if you don’t like it, then you shouldn’t be living in this Country. You knew what this Country was long before you came here.”

“If Christians tried to enact this…all HELL would break loose,” another wrote. “Parents wake up and get involved and stop this evil from happening before it’s too late. We the people are responsible for what’s taking place in our country and we the parents need to take back our schools!”