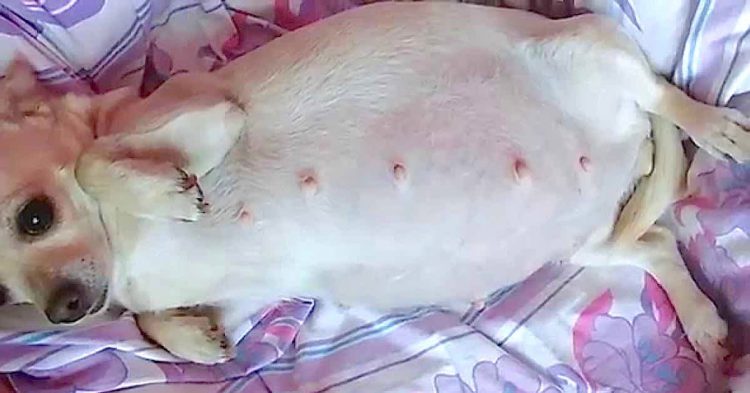 Chihuahuas might be some of the smallest dogs out there, but they are tough little pooches. These fierce fighters don’t seem to realize their size when they confront threats with the fury of a dragon. And with litter sizes of an average of five puppies, Chihuahuas are also tough mothers being able to carry so many little ones and give birth to them one after the other.

Dawn and Bill Slater love animals, which is why their home includes one collie terrier, two cats, and three Chihuahuas – not to mention four adults, a teenager, and a seven-week-old baby. When Dawn and Bill learned that one of their Chihuahuas was pregnant, they could not wait for their families to get even bigger.

The Chihuahua that was pregnant was named Coco. They took her to the vet, who told them to expect the typical litter size of five puppies. The family was excited to have more little dogs running around their property.

Throughout her pregnancy, the Slaters fawned over the adorable Coco. They gave her everything she needed to help her have a peaceful pregnancy. Eventually, the day came when Coco went into labor, and the Slaters were right there along with her to make the delivery of the puppies as easy as possible for the struggling mama dog.

Coco’s puppies were tiny. Although they were dogs, they were as small a mice and weighed just about two ounces. Puppy after puppy popped out of the pregnant Chihuahua.

When Coco gave birth to the fifth puppy, they were relieved. The labor was not easy, and Coco was working hard to get the babies into the world. They made the puppies – and their mama – nice and warm by covering them in blankets and showering them with love.

But when the fifth pup was delivered, the Slaters soon realized that Coco was not yet done delivering her puppies.

“This is just impossible,” Bill thought. “When on earth is it going to stop?”

By the end of the process, Coco had given birth to eleven – count them – eleven puppies in one litter. She gave birth to so many puppies that she became the Guinness Book of World Records holders for the largest littler for a Chihuahua.

Inside Edition ran a report on Coco and her record-breaking litter. They wrote: “All moms deserve awards, but this one can proudly say she’s a world record holder after having 11 puppies, a world record for the most puppies born to a Chihuahua. She gave birth to the pups on National Puppy Day, making the sweet announcement even sweeter. This comes after their 1.5-year-old mama was rescued from a hoarding situation. The 12-hour labor was a big surprise to her foster family.”

“She looks overwhelmed. But she did have beautiful babes.”

“Aww, the mama looks all most just like my Bella that passed away. I want one.”

What’s your reaction to this Chihuahua’s large litter story?