Retired NYPD Detective Gets Attacked For Wearing His “Birthday Hat” 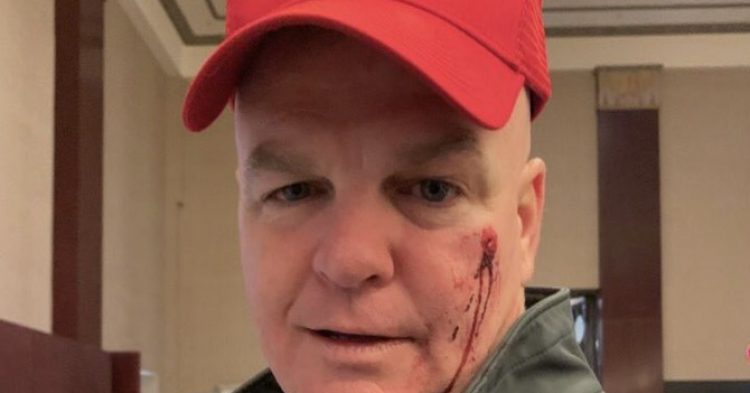 Retired NYPD Detective Daniel Sprague got a punch in the face for his birthday. Because he was given a red “Make Fifty Great Again” hat as a gag gift (it looks just like Trump’s popular red MAGA hat), a woman got in his face and lashed out at him for showing sideways support of President Trump and his anti-immigration initiatives. The hat, which also included the slogan “Making America Great Since 1970,” sparked outrage outside of The Stage on Broadway when the retired police detective came face-to-face with someone the hat offended.

The woman confronted Sprague about his red hat and threw a punch in his face. Because she aimed her fist, which might have had a big ring on it, she managed to slug the retired cop so hard that he bled profusely from the cut to his skin.

He said, “I was outside with my friends when someone grabbed me from behind, spun me around, and punched me in the face. At first, I thought it was a friend until I got hit. I couldn’t believe someone could get that upset.”

The Broadway establishment quickly booted both Sprague and the attacker. Because he was blindsided by the sucker punch, he never got to call the police before the establishment kicked him to the curb.

When he finally recovered from the surprise attack, the retired detective filed a police report with the Metropolitan Nashville Police Department on Saturday morning. Although he took action late, he wanted to make sure his story was recorded, and the police got on the tail of the woman who abused him in public in front of his friends.

“Suspect grabbed his hat from his head and punched him in the face. He stated that when the suspect hit him in the face, he did not hit her back,” the report read.

Sprague had sparked outrage throughout the night from several other people because of his political hat. Although no one but this woman acted aggressively toward him for wearing it, he faced down a lot of people who threw him angry stares and sneers of disapproval.

“All night people were giving me thumbs up, smiles or some showing rage, until they walked up close and saw what hat said. Then they would wish me a happy birthday,” he said.

At first, Sprague loved all the attention he received from the incident. He even took to Facebook to speak out about the attack and his injuries.

He added, “I love Trump, but I wouldn’t hit someone who had a Bernie hat on. Everyone is entitled to their opinion. I wasn’t an Obama fan, but if he walked into a place where I was, I would show him and the office respect.”

When he shared the image of his bloodied face, Facebook users reacted strongly. At the time of the posting, he was still waiting for Nashville police to do something about the targeted attack in New York City.

What do you think about him being attacked over his hat?