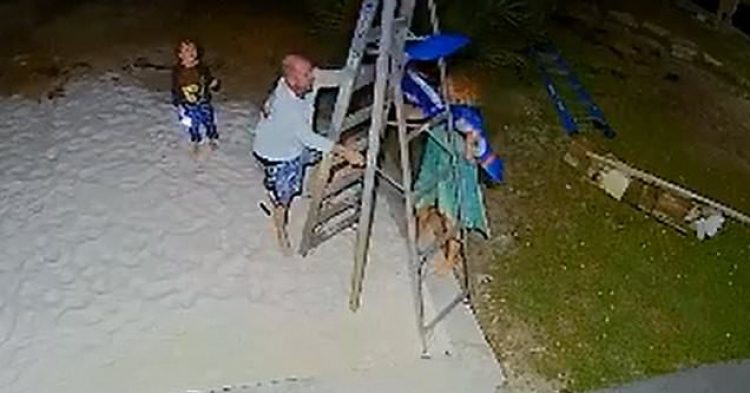 Geoffrey Fraiche and Laura Webb-Fraiche have more in common than their shared profession working on the female reproductive organ. The pair of Florida gynecologists also subscribe to the same political views as each other – and they’re trying to get their children on board with their agenda as well. However, a recording camera caught the doctor couple and their children in the act of criminal mischief, trespassing, larceny, and contributing to the delinquency of a minor when the couple brought their children along for the ride to steal a Trump 2020 flag that a neighbor had been flying in support of the president’s re-election campaign.

The flag that the doctor couple found offensive flew in the wind in Florida and announced “Trump 2020 Keep America Great.” Now 41-year-old Geoffrey Michael Fraiche and his 38-year-old wife, Ann Webb-Fraiche, are in big trouble with the authorities in Florida on multiple charges. They were caught on home security cameras stealing the political flag on April 7, 2020, in Gulf Breeze. The Santa Rosa County Sheriff reported that the couple employed the help of a ladder to bring the flag down into the mud. 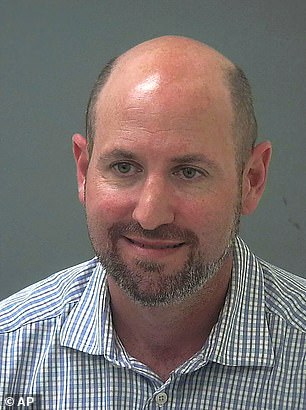 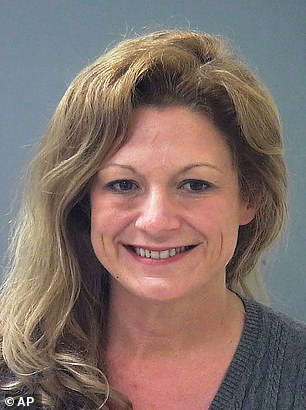 On Tuesday, The district’s Republican Rep. Matt Gaetz, who is a loyal Trump supporter, used Twitter to bash the doctor couple and expose their criminal behavior to the large community in Florida. The elected official included the Ring video footage with captions that showed the couple’s son begging them to stop their criminal behavior.

Fraiche’s wife helps him set up the ladder, but their son continues to plead with them to stop their prank.

“Stop it!” the little boy warns. “I don’t want you two going to jail.”

His mother tells him to stop worrying because they’re doctors and not going to get in trouble. 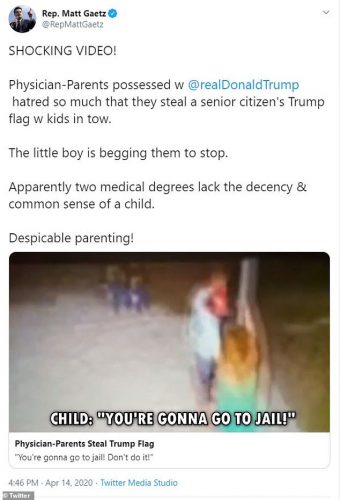 The father brazenly climbs the ladder and tears down the loyal Trump supporter’s flag. It only took him a few seconds to tear down the flimsy material. When he has the flag in his hand, Fraiche turns to his wife and exclaims.

After seizing the flag, the family of four jump back into their golf cart and speed back the way they had come. Because the parents both have medical degrees and work at separate hospitals in the area, they attracted a lot of attention to their criminal mischief.

Gaetz used the opportunity to shame the couple and make it very clear that he does not have respect for them even though they are doctors. 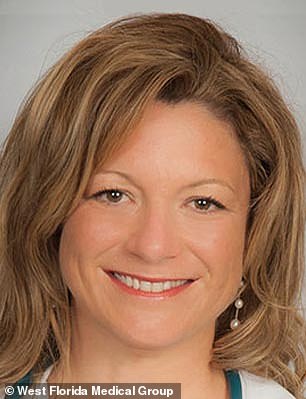 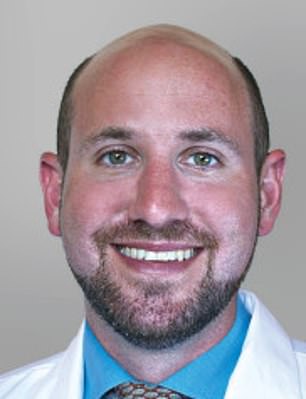 “Apparently two medical degrees lack the decency & common sense of a child,” Gaetz tweeted in response to the video.

The victim in the political prank plans to press charges to the full extent of the law. The victim told deputies that Fraiche caused $500 in damage to his flag pole as well as $200 to the banner itself because the flag costs that much for those who want to support Trump in the coming election.

Fraiche works at the Sacred Heart Hospital while his wife serves patients at West Florida Hospital. Both are highly respected gynecologists in the area.