Woman Saves Up For Weeks To Repair Her Car, Leaves In Tears After What Mechanic Did 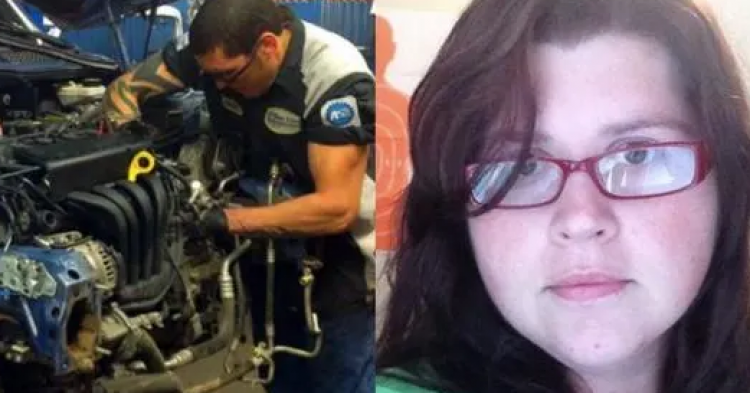 Ruth Vine’s car was suddenly in need of urgent repairs. With nowhere else to turn, Vine brought her vehicle into Meineke in Indianapolis, Indiana. She had only owned the car for a few weeks because she had to buy it after her previous vehicle got totaled in a car wreck. Unfortunately, she quickly realized that the car she bought was a lemon that should never have been sold to her in the condition it was in.

“When I bought the car, it seemed solid in the test drive, but when I took it for an oil change, the manager showed me some things wrong with it that needed to be fixed basically immediately,” she wrote on Facebook.

Vine decided to share her experience at Meineke on Facebook because she had such an inspiring interaction with the mechanic. She was eager to share the love with her friends and followers on the platform.

“Not having the money to handle it all, Mike Hawkins, the manager, and I came up with a game plan, and I promised to be back when I had enough for the brakes (the most urgent repair needing done). Mike had always done right by me with my previous car, and any time there was a concern about a repair, he took the time to walk me around the car and show me exactly what was going on in plain English and with patience.”

Vine saved up to get her brakes fixed but did not have any more money for additional work. She brought her car in with the intention of fixing only the brakes.

“As I was reading a book and waiting for Mike to give me an update on my car, a guy came into the shop and struck up a conversation. We talked for a few minutes before Mike took him out to the garage. I saw them standing under my car, talking (at this point, I’m curious why Mike is showing this random man my car),” she wrote on Facebook. “They come back in, and it seems it’s the owner I’ve been talking with. They tell me they’ve found other issues with the brake line. ‘Well over $1,000’ for the whole job.”

That’s when Vine learned that she was dealing with Good Samaritans. Mike and the Mieneke franchise owner, Scott Martin, told Vine that the mechanic would be donating his time so that she would not have to pay more than she budgeted to fix the car’s brakes.

“By this time, tears are streaming down my face,” she wrote.

Martin confessed that he was not really a “car guy” but someone who wanted to make a positive impact on his customers.

“I had settled on giving up my grocery money to put toward the car repair, and that came out in conversation. As Scott was preparing to leave to go run errands or spend his Saturday with his family, he walked outside and back in, handed me a folded up envelope, and told me it was for after I left the shop,” Vine wrote.

“He shook my hand, promised — again — they would take care of me, and left. Written on the envelope was ‘Ruth’s groceries,’ and it took several controlled breaths to not burst into tears. This man, who is taking a hit — a substantial one in my eyes — to make sure my car is repaired and safe to drive, also paid for my groceries.”

Vine thanked both men for going “above and beyond any expectations of decency and human courtesy” and for helping her afford her car repairs while still having enough money to buy groceries.