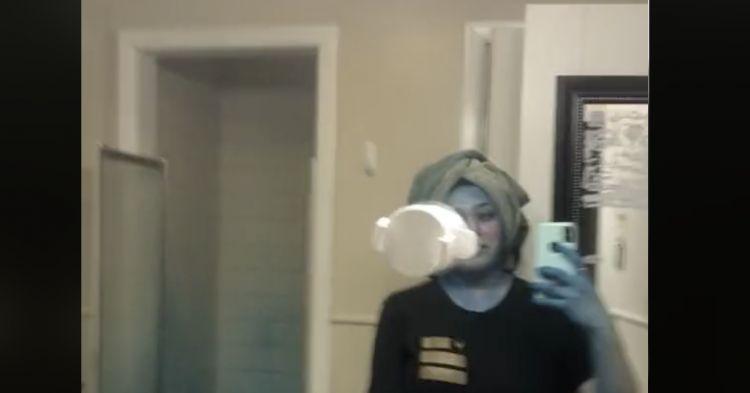 Everyone has had a bad hair day at some point in their life. It’s just part of becoming a real adult. But few people have messed up their hair beyond the point of all repair. But one TikTok user decided to upload a video that has since gone viral in which she reveals the problems she faced while dyeing her hair blue without the help of a hairdresser.

The video from Kinsey Dixon has amassed 25 million views and almost 5.4 million likes since she uploaded her viral video. In the clip, the young woman asks a simple question about her new hairstyle: “Do you think my Gran will notice I dyed my hair?”

The video begins with Dixon pointing the camera toward a mirror. However, it is not until she tilts the camera down that we realized what is really going on in the clip. Before long, we see her feet, but they are not normal. They’ve turned blue as if Dixon was trying out for the Blue Man Group.

Then, she pans the camera up to show off her face in the mirror. Instead of her hair being dyed blue, her face has turned blue in the process! Clearly, this young woman failed at dyeing her own hair at home and created a humorous video in the process.

The shower was also ruined in the process of the hair coloring. The floor of the shower and the walls are tinted blue due to her inability to keep the hair dye in place while trying to change the color of her hair.

Viewers shared many comments about the video, including the following:

“You got some bathroom on your hair dye.”

Another wrote, “I thought you were wearing blue latex gloves on your feet.”

“Did any of it actually it to your hair?”

“I have so many questions,” another viewer said.

“How does that even happen. I’m so confused,” wrote a fan.

“Can you please tell me how you managed to turn everything blue.”

Some people felt that Dixon could be part of a movie.

“If you’re trying to be in the cast of the next Avatar movie, just say so.”

“Pack it up, Smurfette.”

“This reminded me of the girl from Charlie and the Chocolate Factory who ate the bubble gum and turned blue.”

Another viewer doubted that Gran would notice her new hair color.

“No, but she probably might notice you’re the new casting role for Trolls.”

Another suggested a “plot twist.”

“She wasn’t dyeing her hair. She was murdering the entire Smurf village!”

Clearly, TikTok users were delighted by this funny video. Because Dixon managed to fail at dyeing her own hair at home, she turned it into content that has engaged millions of people. Since then, she has gained followers on TikTok and published more content for people to view on the Chinese-created platform.

What do you think about this young woman’s hair dyeing faux pas? Have you ever seen anyone do something like this in the past?